My wife was indisposed yesterday when it was time for guest changeover, so I had to work alone. I started at 10:30 am and the work was completed by 16:30 in the afternoon. The departing guests had a dog with them and had not reported any problems during their stay.

On checking the crockery, I found a dinner plate missing from the matching set. We keep four place settings for the crockery in the cottage. There was no note left to explain the missing plate. Fortunately we keep a full duplicate set of the crockery at home, but it meant I had to undertake an additional 16 mile roundtrip to collect a spare plate in time for the next guests. 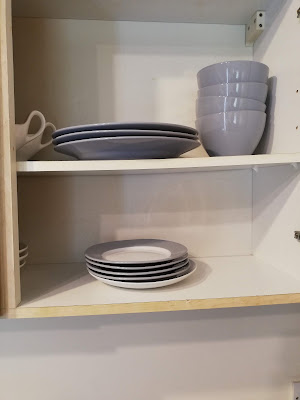 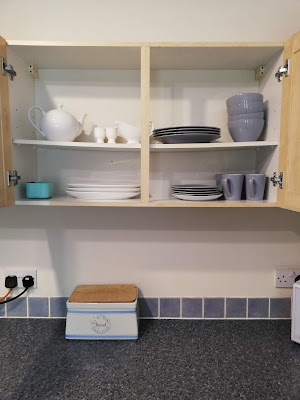 The missing plate restored
I later found the missing plate in pieces in the General Waste bin when I was cleaning the bin as part of the Covid-19 safety procedures.
While making up the bed I found that our guests had managed to stain the mattress cover with tea. Once again no mention of this issue. Fortunately I had a spare on hand in the cottage linen cupboard to provide for the guests due to arrive three hours later.. (Edit note 7th June 21: This was a brand new John Lewis mattress cover. The stains have not come out after washing. Effectively it is a total loss so far as use in the cottage is concerned.) 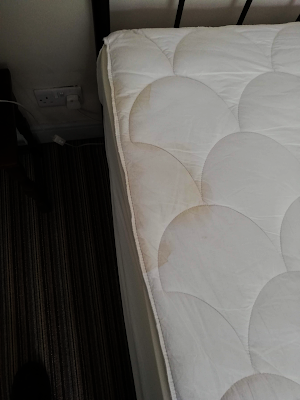 Ruined mattress cover
While I was cleaning the shower, I noticed that the water was slow to drain from the shower pan. On investigation I discovered the drain trap was clogged with dog hair. It was the same type/colour of  dog hair matching the previous guest's dog.  They'd used the shower for their dog, even though the handbook forbids this.  Maybe we should charge extra for pets staying with the guest? 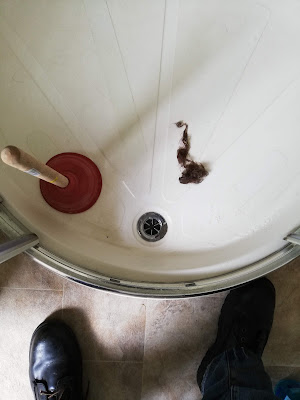 Dog hair blocking the shower drain
Posted by Orchardman at 08:19

We automatically delete any SPAM comments. All comments are subject to moderation before publishing. Any SPAM is individually reported to Google as such, this reduces the offending site's Google Ranking.