When we cleaned the cottage at the last changeover, my wife noticed that the wall surface in the bedroom had been scuffed leaving dark marks on the newly painted wall. Presumably this had been caused by a carelessly handled luggage scraping against the wall. 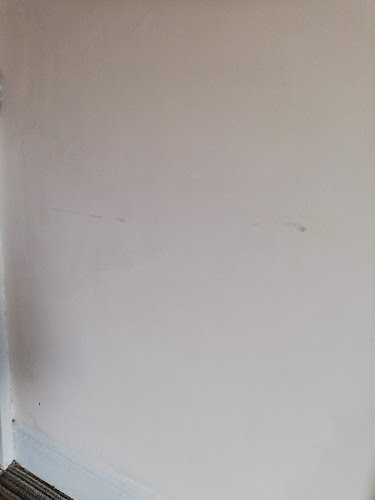 This damage was quite annoying as we'd only just finished decorating the interior of the whole cottage a couple of weeks previously. I think perhaps there'd been a total of 7 guest nights since the redecoration.
I also noticed some damage to the lock of the linen cabinet located on the first floor landing. Again, these doors had been recently painted as part of the redecoration, so the damage was very recent. Yet more repairs to do when there's a gap in the bookings. 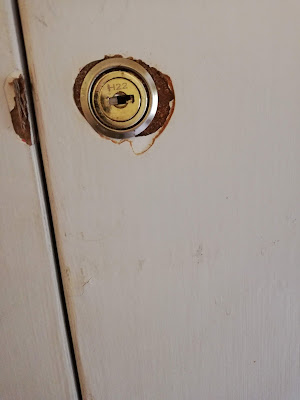 The cleaning work involved vacuuming the bedroom carpets. My wife was using the cottage's brand new vacuum cleaner. We'd had to purchase a new one because, shortly before the lockdown, we'd found the older one had been broken and was no longer working properly. The older vacuum was less than 18 months old.
I also discovered the lower bracket on the stair bannister rail had become slightly loosened. Whilst the overall rail is safe, I'll need to take off the lower bracket from the rail, and remove it from the wall. I'll then need to repack the screw holes in the wall and then remount the rail bracket. Unfortunately I only discovered the issue late in the cleaning cycle and didn't have sufficient time to go collect the correct tools and supplies to effect a repair in time for the next guests. The rail was not loose during redecoration process.
Edit 25th Sept 2020:
Our last set of guests were excellent, but it was a disappointment for them to find that the electric toaster was not operational. Thankfully our guests left us a note to let us know. There was no fault report of this by the penultimate guests, which was annoying because if we'd known we would immediately replaced the toaster. The toaster unit had been PAT safety  tested by an electrician in July before we re-opened for business after Covid-19 lockdown. I guess we'd best test and document, every electric appliance in the cottage between guest stays.
We already have a note in the cottage handbook asking people to report faults to us when they find them so that we have the opportunity to remediate without delay. However it seems some guests subsequently abuse the post-stay comments process to pick fault in their subsidised  holiday accommodation even though damage occurred during their stay. So far we've not charged for damages, but we've decided it is time to introduce a "good housekeeping bond" for bookings.
Posted by Orchardman at 23:44

We moderate all messages and delete any spam designed to promote other sites.